Dream of the Shadow Dragon's Fall

Sir Puck’s dream started off with seeing a clutch of large grayish black eggs. He heard the sounds of a beast-like creature fighting something possibly humanoid. Then he saw a pair of large hands grabbing one of the eggs easily then runs off with it.

Sir Puck’s vision switched to that of an ancient one from which perspective he could see they’re no bigger than a gnome. Sir Puck followed him on a journey through the woods until he came across a camp of gray giants. He sneaks through the camp and is accidentally knocked through the air by a giant who just sat down and stretched out. Sir Puck lands in a bushel of dead goats and 3 eggs just as he had seen before in his vision. He grabbed one which he found impossible to carry without both hands. Sir Puck snuck back out of the camp. Sir Puck stashed the egg and headed back to retrieve the others, but when he returns it’s to late. The giants are cooking the eggs. He sadly returned to the one egg he saved and begin his journey back to the nest. Along the way back he could feel the egg shifting on he inside. Sir Puck realized it’s going to hatch soon and doubled his pace. He finally made I’t back to the nest to see what was clearly a large dragon missing its wings; they look torn off. He presented the egg just as it’s first crack appeared scorching one of his hands as steam poured out of the egg.

The dream shifted. Sir Puck was inside the nicest building he had ever seen. A race that is tall like a human, but has ears like an elf but longer and from their forearm down there hands glows with a pail green light. The being looks like you would expect a medieval architect/wizard would appear; he’s wearing glasses, which had a plethora of extra magnifying lenses off to the side that appear like they can be switched down. As Sir Puck approached him he saw a glimpse of blueprints which looks like they could be for the armor from a previous dream Sir Puck had. The Architect (as we will refer to him as that for the time being) handed Sir Puck the orb, however it was empty. He spoke in a language that Sir Puck had no clue what he was saying, but at the same time he understood he wanted Sir Puck to gather energy with it. He wanted Sir Puck to go to another plane and absorb the ambient energy to power up the orb.

Sir Puck took the orb and left the building heading outside. He realized he was standing on an island in what could only be described as a black void. There are other islands too, with other buildings on them. However they’re floating at different angles at different heights just suspended by the void. Sir Puck headed to the edge of the island and leapt off the edge into the air much father then Sir Puck could ever imagine leaping, floating almost in the air drifting towards an island that looks like Stonehenge, except in each set of standing stones there’s a portal, each glowing in a different color. Sir Puck was clearly supposed to go to the one glowing in a soft blue that flashes with bright white light ever so often. Sir Puck however headed to one that glowed a soft dim green. Looking through it, it clearly had a forest on the other side.

On the other side of the portal Sir Puck headed through the woods a familiar path and to where the nest of the dragon was. This time there was no wingless dragon there, but one that was large size, but much younger. Sir Puck felt as if he recognized the dragon, but not from the vision. There was something very familiar about it. He spoke the dragon’s name, however he couldn’t hear himself when he spoke the words. Sir Puck then climbed upon the dragon and soared through the sky, and then landed near the portal and walked through together back to where Stonehenge was in the void.

Sir Puck rode the dragon through the blue portal that was the one he was supposed to go through. Walking through the portal he found himself on a tiny floating island in the sky. There were clouds above him and below him. Sir Puck took off into the sky. Sir Puck realized the flashing light from before were bolts of lightning. He dodges several and realizes he must collect that lightning in the orb.

Just as he extends his arms for a bolt to hit him a blue serpent like dragon erupts from the clouds and the dragon Sir Puck was riding immediately used its black flame breath weapon to attack it. 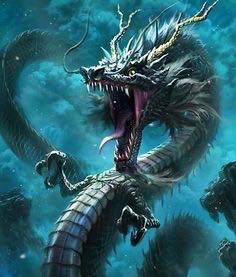 The other dragon immediately dodges. As Sir Puck’s dragon went in for another attack this time up close he struggled to calm the dragon down. However the damage had already been done and the other dragon went in for an attack. Sir Puck quickly couldn’t tell he and his dragon were outmatched. As it landed several attacks on his dragon, biting it’s neck, and then he saw it’s tail headed towards him. He ducked and black out. When he awoke he realized he was falling through the sky.

Sir Puck’s dragon broke free from the other dragon and doves after him. Sir Puck looked towards where he was falling towards, which was an island close to where the portal they had come through was. He also realized that falling out of his reach was the orb. He looked back to the dragons. He told the dragon “It’s.. ok, you’ll never reach me in time. Escape while you can”, and with that he saw the other dragon open it’s maw and start to gather all the surrounding lightning into its mouth, getting ready to exhale its elder lightning at Sir Puck. Just before it hit Sir Puck he felt himself surrounded by the warmth of his dragon. He could feel his dragon’s muscles contort with pain as the electricity rans though them and then a sudden stop. He blacked out once more.

Sir Puck awoke moments later and struggled to get out from under his dragon. he saw the serpent dragon fly off. He looked back to his dragon; her neck broken, and white scorch marks in a Lightning pattern all across her skin. She laid there dying. The dragon asked as she spit up blood, if he was alright. Sir Puck nodded and she smiled. She said, “I’m sorry but all my Instincts said to fight.” Her eyes started to turn white; she’d be dead soon. Sir Puck wiped his teared up eyes and then a thought crossed his mind. He scrambled and looked for the orb. He found it just as he was sure she’d taken her last breath, and activated it holding it where he thought her heart was, begging he said “please work”. The orb began to turn a dark purple, then lightning struck the dragon and Sir Puck jolted off launching him a few feet into the air. He blacked out again, this time when he woke he saw the lifeless body of his dragon lying there. “I’ve failed her” he said. (and Sir Puck felt empathetically). Just then, flickering in the light, he saw the shadowy little girl standing next to him and then at this point he woke up.

Dream of the Shadow Dragon's Fall

Ascendant campaigns can view previous versions of their pages, see what has changed (and who did it), and even restore old versions. It's like having a rewind button for your campaign.

We've already been saving your edits, so if you upgrade now you will have instant access to your previous versions. Plus, you get a 15-day free trial, so there's nothing to lose.

I'm sorry, but we no longer support this web browser. Please upgrade your browser or install Chrome or Firefox to enjoy the full functionality of this site.